Geez, I have been HORRIBLE about keeping a blog. My bad. Feel free to virtually smack me on the hand.

I guess part of the reason that I haven't kept a blog is that I haven't really been keeping up with the exercise plan. Whoopsies! This summer, I got really really lazy, and was just eating, sleeping, and watching tv (read: not much working out). I know I ran my mouth a lot about how I was going to drop X number of pounds by doing Y and Z, but I didn't do it, and ended up packing on some of the pounds that I had worked so hard to lose. Oh well, no biggie (lol I'm so "punny"). Here's the current state of affairs

Exercising
Lol, remember my big triumph back in the spring? I went from running no more than 30 seconds at a time to running 5 miles uphill, without stopping. Yes, it took me a little over an hour, but so what? I got it done. Well, that was a bit of overkill and I ended up jacking up my knees. So that was pretty much the end of that.

After a loooooong hiatus, I tried to get back into running during the summer. Frustrated at no longer being able to run more than a mile and a half without stopping, I quit that just as soon as it started. Sometimes your mental will mess you up more than your physical.

I've been doing pretty well with Zumba since the school year started. Now, gotta get back to the gym and back on the track.

Dieting
Like I said before, I was not watching what I ate at all during the summer. I was a bit mentally drained at the prospect of just eating raw foods the duration of my "summer vacation." What kind of vacation would that be?

When I came back from the break, I made a conscious effort to eat better, after seeing that I had gained like 15 pounds since my low point last May/June; however, that didn't work so well. I was so used to pigging out that it was hard to get back into good habits. I gave myself the deadline of my birthday to get it together...well, my birthday has passed, so now I've put into effect...

OPERATION BIKINI!!!!
Remember my ranting and raving about wanting to be in a bikini by age 30? Well 29 has come, and I have approximately 11.5 months to get it together. Piece of cake (haha pun again!).

For the past two weeks, I've been conducting independent research on the perfect diet/exercise plan (read: I've been consistently going to the gym and watching what I eat). So far, I've taken off 7 pounds since the beginning of the school year. I'm only weighing myself once or twice a month (at most), so it could be much more of a loss. Who knows, and really who cares? I promised myself that I'd be less neurotic about numbers, meaning the scale. What's the point of weighing yourself four times a day? Nobody else notices half a pound gain or loss but you.

Here are the basic tenets of Operation Bikini (I plan to ride this out until the big 3-0 next year, unless it stops working, then I'll have to tweak):

1. Stay off the scale except once or twice a month (scale = misery lol).
2. Combination of Slim-Fast and Subway plan for diet. (Meaning: one or two shakes per day, footlong veggie delight). HOWEVER I cut myself some slack. If, for example, someone brings in donuts at work, I will allow myself a donut. If they have something good in the cafeteria, I'll have some. If I go over to my parents' house and they order Chinese, I'll eat Chinese. etc. etc. etc. ad infinitum.
3. Zumba, Zumba, Zumba!!! (for the cardio)
4. Gym, Gym, Gym!!! (to get BUFF!!!)
5. Run, Run, Run!!! (to melt off the pounds)
6. Blog, Blog, Blog!!! (to keep myself accountable)

Well that's it for now. I'm comfortably in a size 12, so I didn't do that much damage.

By the way, my parents hooked me up with this tight scale that measures weight, body fat percentage, fitness level, the weight of your bones and muscles, your hydration level, number of calories your body needs per day, your body's biological age, and the level of fat around your organs.

EDIT: Here is what the scale said on September 25: 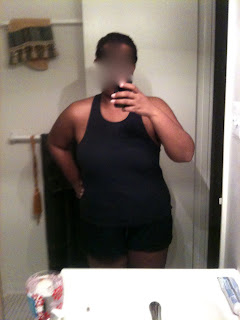 *Face has been obscured to preserve anonymity lololol
Posted by Janexx at 9:20 AM