It just dawned on me that some of you may not know how I looked when I began this journey. Here's a picture of me, in August 2009 (seven months ago). That was when I was around 224, almost 40 pounds ago. 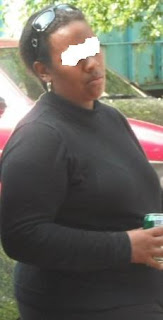 I wanted to pixellate my face, the way they do on TV, but I just don't have that kind of technology lol. So I just erased my eyes. Sounds sinister. Muhahaha.

Anyway, that's just to give you an idea of me "BEFORE." I'll take another shot of myself tomorrow. It's not quite "AFTER," because I still have a long way to go. But I'm sure you can see the change. And I wasn't even 100% about it during the entire seven months.

Looking back, I realize that I was afraid to seriously try, because I felt that it would be a slow, painful journey. But now I see that changes are quick, and it's not nearly as painful as I thought it would be.

If I could give any advice to someone who's on this journey with me, it's to stay encouraged and dedicated. You will see changes if you stick to it. Progress may be slow at first, like mine was (it took me NINE MONTHS to lose SIX POUNDS...imagine my frustration), but if you dedicate yourself fully to the process, chances are that it will pay off. (If it doesn't, then you should get yourself checked for hypothyroidism, or other conditions that may make it hard for you to lose.)

(P.S. Tomorrow, I'll give you guys an update on the weight loss. It is a scheduled weigh-in day, because I'm moving to the next phase of the program. Yay, I get to drink juice again!)
Posted by Janexx at 9:31 PM