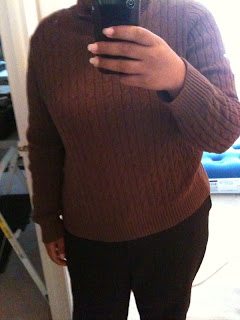 I weighed myself again this morning. Surprisingly, that's where I'm lacking the self-discipline, not the cleanse. 190.5. I expected to lose more, but I have some...uh...women's issues going on, so I'm not that shocked.

Yesterday was my first day back at work since "Snowtorious B.I.G." That was six, count 'em, six extra days that I used to my full advantage, by working out like a maniac. During that week and some change, I dropped about 8 pounds.

I didn't realize that my weight loss would be so obvious. My coworkers are a very sweet and festive bunch, and are quick to congratulate me whenever they see a positive change. I received numerous compliments, and dispensed fitness advice on what had worked/not worked for me.

I'm not saying all of this to brag, but to bring up an interesting sentiment. As I stated in my first post, I just recently got comfortable in my own skin, being a "big girl." Now, I don't know where I stand anymore.

This thought actually first crossed my mind Sunday at spinning class. In the past, the group fitness was no stranger to me. I've done martial arts, dance classes, step classes, yadda yadda yadda. And I've always felt some degree of awkwardness.

It's hard to put it into words, but I've always felt a small sense of curiosity and skepticism directed at me from some instructors and class members, as if they expected me not to be able to keep up. It may have all been in my head. Probably, most of it was. But, I have dealt with prejudice that would understandably make me feel this way.

For example, when I started with the running club last September, I couldn't run the entire mile for the preliminary assessment. A running coach invited himself to run along side of me to "encourage me," the whole time making false assumptions about how I never set foot in a gym, or exercised a day in my life. It obviously pissed me off royally, since I can vividly remember it five months later.

Anyway, this past Sunday, I went to spinning and had my first class with a new instructor. This was the first time I didn't feel as awkward. The spinning lady was just as tough on me as she was on everyone else. When she said, "do (such and such) at your own pace," she wasn't looking right at me, like many other instructors used to.

At the end of class, when I told my fellow class members that I generally run, and am new to cycling, there were none of the stifled expressions of confusion or disbelief that I'm used to seeing. People weren't condescendingly nodding and smiling. They were genuinely interested and asking me questions. I was pleasantly surprised, but a little confused. After my experience at work, it all came together. Maybe, just maybe, people don't see me as a big girl anymore...

When I look at myself in the mirror, I do not see a change. Like I was telling one of my friends yesterday on the phone, "I can reach over and touch my arm or leg, and it feels different." But I seriously don't see any difference. To me, I'm still a big girl.

What's the definition of a "big girl"? I probably shouldn't even care, but when you've been put in a specific category your entire life, it's kind of hard not to.

I've never had this experience in my life. I've never been small, and it's been a decade since I've been anywhere near what (people have been brainwashed to believe) is average. Truth be told, I have been "average" my entire life, but that's for another blog post. It's sad that I'm only realizing that now.

I guess the moral of the story is, as one of my friends told me on Facebook, "Love yourself!" It doesn't matter what size you are. This is especially true for us bigger folks. There's so much negativity directed our way that it's easy to fall into that mentality and start internalizing it.

I feel that I've wasted too many years of my life hating the way I looked because other people brainwashed me to do so. But I'm the same person as I was 33.5 pounds ago, and I'll still be that person at whatever weight I choose to end my journey.