Some people would say that I'm a big girl. It took me a long time to accept it, but I've come to terms with it. I can't go to most of the chic stores at the mall (i.e. 5-7-9, Forever 21, The Limited) and pick up a cute outfit. Why? Because they don't make them in my size. But it's alright. I will soon be able to wear whatever I want.

I've been self-conscious about my weight since the age of three. A six-year-old cousin came to visit one day, and I noticed the size of my thighs in comparison to hers. In my own mind, I was fat. I started taking note of the scale. I vividly remember one hot summer day when I was eight, I rode my bike around the block countless times. After each turn, I'd run inside and jump on the scale to see how much weight I lost.

This behavior continued. When I was 9, I broke the 100 pound mark. That day, I did jumping jacks and ran in place, until the number on the scale went back down to 99.

Throughout my teen and young adult years, I continued to be hypnotized by the scale. I was always chubby, but I didn't become really "big" until I hit puberty in the summer between 8th and 9th grade. At that point, I went from 160 to 190 pounds. The weight gain continued until I hit 220 during my sophomore year of high school. At that point, I became fed up and started to watch what I ate. I graduated, weighing about 193.

In my adult life, I've had my ups and downs. My all-time lowest weight came the year in between freshman and sophomore year of college, when I was working as a camp counselor at a rec center. I kept very active, with our daily camp activities of swimming, ice skating, and the like. I was also using the Slim Fast shakes twice a day. At this point, I was around 187, until I gained the weight all back within a few months. I lost weight when I was sad and didn't eat much. I gained it back when I went back home during the semester breaks. I lost it when I had a fever and couldn't eat. I gained it back when I could.

The cycle continued until I was sick and tired of dieting and working out, and I decided to accept myself as I was...well, at least that's what I thought. The truth was that I had given up.

In January 2009, I was at my all-time high of 224 pounds. There had been an accident at my home two months prior, which, truthfully, interrupted my sleep cycle for months to come. In my hotel room, I would wake up at 4 am, eat, watch television, and go back to sleep. Aggravating the situation were my health issues. None of them were caused by my size...my blood pressure and cholesterol were normal (actually, slightly on the low side...most likely from me having been a vegetarian for 20 years). However, I was always missing work, and in and out of doctor's offices for mysterious thyroid issues, which apparently disappeared on their own.

Several things happened that year and beyond, which would set in motion the course to change my life:

1. In July 2009, my sister-in-law began running. She offered to train me, if I went running with her.

At first, I laughed. While I had always been athletic, playing soccer, softball, and basketball, even recreationally in my early- to mid-20s, I had never been a runner. Every time we ran the mile when I was in school, I'd try to find a way to either be out sick that day, or conveniently forget my gym clothes. I had bad asthma as a kid. When I was a teenager, I hated the shame of always coming in last.

However, I've never been the type to back down from a challenge. So, the second time she mentioned it, I was game. I ran my first 5K in August. Well, actually it was more like walking, with a little bit of running. I finished with a sucky time of 53 minutes.

Meanwhile, I had been mentioning my new hobby on Facebook. An old high school chorus friend took note of my posts, and offered to practice running with me, at a local middle school track. Soon, we were running at least three times a week, which brings me to:

2. The bet.
By my 28th birthday in September 2009, I was at 218 pounds. However, I didn't look it. In the past, whenever I was asked for my weight, I'd lie and shave off about 20 or 30 pounds. People usually believed me, because I was solid. As I said before, I was pretty athletic throughout most of my life. I started lifting weights when I was maybe 4 years old, in the garage, under the supervision of my parents, or my older brother. So this 24+ years of training had built some serious muscle, but in my shame of the number, my weight was a well-kept secret.

Anyway, I was sitting at happy hour, celebrating my birthday of the day before. My running buddy was the first to show up, and we started talking about our fitness goals. It was then that my secret came out.

I told her my weight. It's not like she would scream and run away, but I always thought that people would treat me differently if they knew. Anyway, she offered a bet. Whoever lost the highest percentage of weight (I outweighed her by more than 60 pounds) in 5 weeks would win $100.

Like I said, I don't back down easily from a challenge, so I took her on. I amped up the exercise, and went straight to what had worked so well in the past, Slim Fast twice a day. The first week I lost 8 pounds. I kept running with her and another local friend (who joined us after coming to show support at my first 5K), with my sister-in-law, and with a running club that my sister-in-law got me to sign up for with her.

By the end of the five weeks, we had called off the bet, due to my running buddy's tendonitis and my constant colds and flus (inevitable, due to my profession). We had both lost a lot of weight. I was down to about 204, although she probably would have won, percentage-wise.

3. My running buddy introduced me to Zumba.
Like me, you may be wondering, "What the heck is Zumba?" Zumba is a Latin-American form of aerobic dance. It burns up to 1000 calories per hour.

I was never much of a dancer, but I started to improve rapidly, as I fell in love with Zumba. I made friends with a group of my running buddy's pals who also were Zumba addicts. It was like happy hour, but better. We were all working out, and getting healthier, together.

With Zumba, I was able to break the 200s, getting to 196 by the end of my first month, in January 2010. However, I caught yet another bad cold, and wasn't able to exercise for a week.

That Friday, we had an optional fitness assessment at work. I was told that I weighed 204 pounds, and had a body fat percentage of 40.1%. I was disappointed. Granted, the number on the scale wasn't totally accurate, due to my heavy clothing (I pigged out and didn't work out that entire weekend, and found that I weighed 199 that Monday), but this made me super-motivated for:

4. The cleanse
My running buddy sent me information about a cleanse she was going to do from February 8-28. I decided to do it with her, to rid myself of toxins. It consisted of raw foods, and fresh pressed juices. Even though I'm a vegetarian, I have never really been big on fruit and vegetables. I should have called myself a starch-etarian.

So, the story picks up here. I'm a little sore today from spinning class yesterday, but I'm so excited about Powerflex class today. I'm going with my other friend, from elementary school. We also became workout buddies via Facebook, when we found we had the same gym.

Powerflex is awesome. You lift weights for an hour straight. I'm super-excited about it because I'm getting definition that I haven't seen in literally 15 years, since I was hitting the weights hardcore for basketball (prior to the puberty weight gain). I'm most proud of my new shoulder muscles, which are starting to firm up. I may or may not do Zumba today.

I'll try and keep this blog as updated as possible. I've never been very good about keeping a journal, but hopefully this will inform, and maybe inspire, some people out there. Feel free to drop me a comment, but please keep it positive. I look forward to going on this journey on with you! 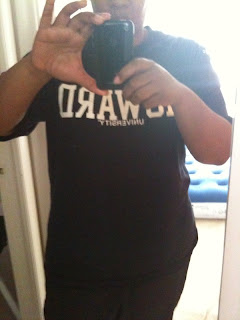