Ugh. I weighed in this morning, and found that I only lost a pound in phase 2 of the cleanse. Honestly, I can probably attribute this to my frequent improvisations.

I did bend the rules pretty frequently. For example, I was supposed to be making my own salads at home with my own (raw) ingredients. However, I was working out pretty hardcore, and getting sick because I was lacking protein. So, I went to Subway to get a veggie patty salad.

This was supposed to be a one-time thing, but that salad kept calling me back. One patty turned into two. Soon, I was eating double veggie patty salads twice a day, with double honey mustard dressing. So, I only have myself to blame.

However, it was a loss, not a gain. And if I look at the big picture, I did lose six pounds in a week. Plus, I'm feeling new muscles popping out every day.

Everybody tells me it's NOT all about the scale. Today, I'm going to buy some Dream Jeans.

Dream Jeans are what I call pants that I buy, which are the next size down. I periodically see how close I am to fitting into them. When they fit, I incorporate them in my wardrobe, until they're too big. Then, I throw them in a Space Bag and put them on the top shelf of my closet. I hope I never have to take anything out of that bag again.

In July, my Dream Jeans were a size 18. In September, they were 16s. By January, they were size 14 jeans. I had only worn a 14 once in my adult life, and that was when I was a camp counselor in college. I was back in a 16 within a month of returning to campus.

I'll never forget the day I fit into the 14s for the second time. That was about a month ago. I was so excited that they even zipped up, that I proudly wore them to work, despite my slight resulting muffin top. Since then, the jeans fit a little better. It may be because I lost more weight. Could be because I stretched them out. It's probably a little of both.

Today, I'm going to Burlington to get my size 12 Dream Jeans. To paraphrase my mom, clothes at a discount store are cut smaller than clothes sold at the more foo-foo bougie places. I'm sure if I went to a higher-end store, I'd already be a 12. Maybe even a 10. I'm gonna keep it real with myself, and buy a pair of $5 clearance jeans. Hopefully I'll be in my size 12 by April.

Below is a picture of me, today at 193 pounds. Tomorrow, tune in to see if I survive Day 1 of Phase 3 of the cleanse. Mmmmm...apple juice. 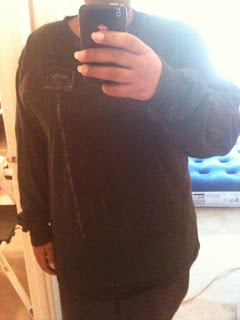